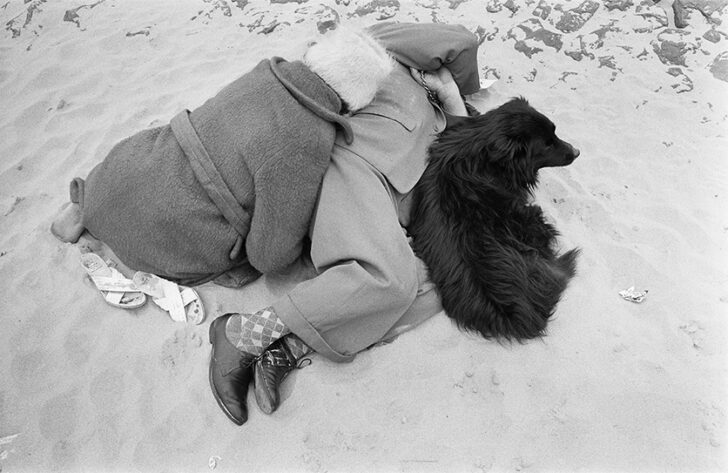 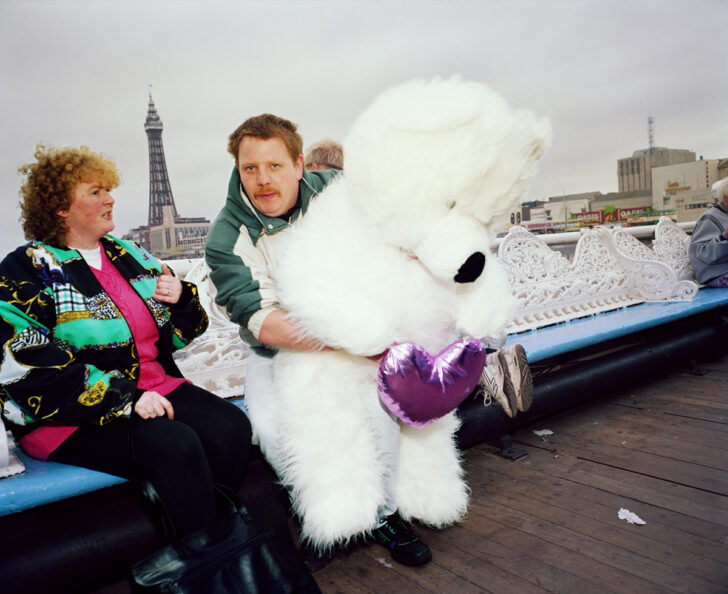 To inaugurate its new exhibition space, the Fondation HCB presents an original exhibition on the work of Henri Cartier-Bresson (1908-2004) and Martin Parr (born 1952). With a “large gap” between them, according to Parr, the show reconciles the two photographers through their perspectives on Northern English society, at work and at play, in three different eras.

Renowned photographer Martin Parr stirred up controversy with his color photographs of the British “middle class” on the beaches of Northern England. His attempt to join the Magnum Photo agency in 1989 met with outcry—even agency co-founder Henri Cartier-Bresson was angered by the prospect. A meeting between the two artists eventually led to friendly reconciliation and the possibility of coexistence between their differing views on photography, which, in the words of Cartier-Bresson, come from “two separate solar systems.” Parr joined Magnum Photos in 1994.

While the two photographers were open about their artistic differences, a recent discovery adds nuance. In 2021, the Cinémathèque française unearthed a film by Douglas Hickox, made for British television station ITV/ABC in 1962. It was shot with a rostrum camera and features photography by Henri Cartier-Bresson. In Stop laughing – This is England, Cartier-Bresson offers an entertaining portrait of the English at work and at play in the country’s industrial north. His photographs, commissioned for the film, as well as commentary, bear an unsettling resemblance to the much-maligned work of Martin Parr, published in The Last Resort in 1986, some 24 years later.

The exhibition Reconciliation presents Cartier-Bresson’s original prints, the raw material for the film (also on show), The Last Resort, a book by Martin Parr, and Black Country Stories, one of Parr’s more recent commissions (2009/2010), which sees the artist retracing his steps in Northern England to take photographs…of the English at work and at play: three time periods and two perspectives on a society and its transformations (1962, 1986, 2010). As Cartier-Bresson put it: “England is the most exotic place in the world.”

This exhibition is organised with the Martin Parr Foundation, Bristol.

His work was exhibited and published, first abroad and then in France, starting in 1933. He then traveled in Europe, to Mexico and the United States. Interested in filmmaking, he collaborated with Jean Renoir in 1936 and 1939, and produced three documentaries on the Spanish Civil War in the same time period.

Taken prisoner on June 23, 1940, he managed to escape in 1943, after two unsuccessful attempts. The Museum of Modern Art (MoMA) in New York presented an exhibition of his work in 1947, the same year that he created the Magnum Photos agency, along with Robert Capa, David Seymour, George Rodger and William Vandivert. He then spent three years in the East.

Back in Europe, he published his first book, Images à la Sauvette (The Decisive Moment), in 1952. After this, he traveled on numerous occasions and devoted himself to drawing starting the early 1970s. Dubbed “l’œil du siècle” (eye of the century), Cartier‑Bresson bore witness to the great events of the 20th century: Gandhi’s funeral in India, the last days of the Kuomintang in China, first photographs of the USSR after the death of Stalin… At his passing in 2004, he endowed the history of photography with an inimitable legacy, which is still subject to new interpretations.

Martin Parr
Martin Parr (born in Epsom, United Kingdom, in 1952) is one of the best-known documentary photographers of his generation. With over 100 books of his own published, his photographic legacy is already established.

Parr also acts as a curator and editor. He has curated two photography festivals, Arles in 2004 and Brighton Biennial in 2010. More recently Parr curated the Barbican exhibition, Strange and Familiar.

Parr has been a member of the Magnum agency since 1994 and was President from 2013 – 2017. In 2013 Parr was appointed the visiting professor of photography at the University of Ulster.

Parr’s work has been collected by many of the leading museums, from the Tate, the Pompidou and the Museum of Modern Art in New York.

Martin Parr established the Martin Parr Foundation in 2017. In 2019 the National Portrait Gallery in London held a major exhibition of Parr’s work titled Only Human.

With the support of