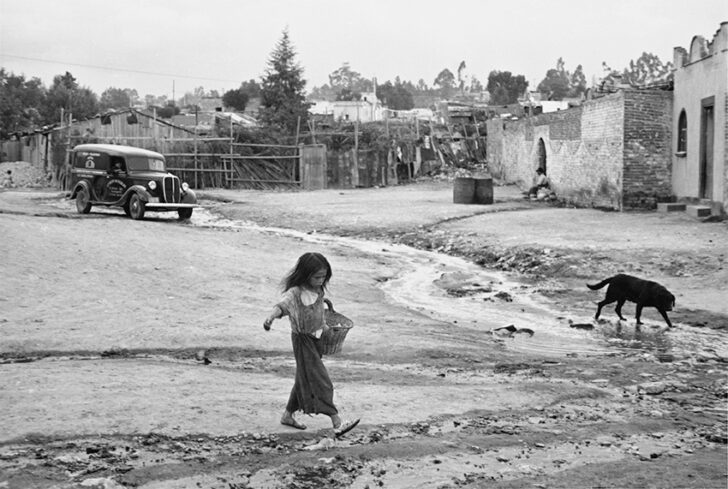 The Fondation HCB is pleased to present an original dialogue between the Mexican photographs of Helen Levitt (1913-2009) and those of Henri Cartier-Bresson (1908-2004). The two photographers first met in New York in the spring of 1935. Cartier-Bresson had just spent a year in Mexico, while the American had only just started photographing the theater of New York street life. In 1941, fascinated by Cartier-Bresson’s work, Levitt decided to visit the same destination. The two voyages to Mexico turned out to be pivotal points at the beginning of their long careers, during which the two photographers each forged their own respective conceptions of photography.

In 1934, Cartier-Bresson left for Mexico on an ethnographic mission, canceled on route for lack of funding. Enamored by the country, he decided to stay for nine months. “It’s not a curiosity to be visited but a life to live,” he wrote his parents. He met many artists there and exhibited in March 1935 with Manuel Álvarez Bravo at the Palacio de Bellas Artes in Mexico City, before leaving for New York.

In April 1935, 21-years-old and having never traveled before, Levitt was enthralled by the Frenchman’s Mexican photographs, which she saw at the exhibition Documentary & Anti-Graphic Photographs presented at the Julien Levy Gallery. Cartier-Bresson’s photos were shown beside those of Manuel Álvarez Bravo and Walker Evans. “Walker Evans was brilliant, truly brilliant, but Cartier-Bresson was a genius!” she liked to say. Meeting the latter two convinced Levitt to take up photography herself. She also helped Cartier-Bresson with his prints since, as she said years later, “he didn’t like printing.”

A few years later, in 1941, Levitt left for Mexico accompanied by Alma Agee, wife of novelist James Agee, and their son Joel. Throughout her long photographic career, this was the only trip abroad she would take. She stayed in Mexico City, exploring areas right at the border of the city. As in New York, she sought a degree of intimacy with the figures in her images. And like Cartier-Bresson, she avoided the picturesque.

Curators of the exhibition
Agnès Sire
Clément Chéroux, director of the Fondation HCB

Born in Chanteloup, Seine-et-Marne, in 1908, Henri Cartier-Bresson began studying painting at the André Lhote atelier in Paris before he turned to photography. In 1931, following a year in Africa, he purchased his first Leica.

His work was exhibited and published, first abroad and then in France, starting in 1933. He then traveled in Europe, to Mexico and the United States. Interested in filmmaking, he joined the Nykino group and collaborated with Jean Renoir in 1936 and 1939. He produced three documentaries on the Spanish Civil War in the same time period.

Taken prisoner on June 23, 1940, he managed to escape in 1943, after two unsuccessful attempts. The Museum of Modern Art (MoMA) in New York presented an exhibition of his work in 1947, the same year that he created the Magnum Photos agency, along with Robert Capa, David Seymour, George Rodger and William Vandivert. He then spent three years in the East.

Back in Europe, he published his first book, Images à la Sauvette (The Decisive Moment), in 1952. After this, he traveled on numerous occasions and devoted himself to drawing starting the early 1970s. Dubbed “l’œil du siècle” (eye of the century), Cartier-Bresson bore witness to the great events of the 20th century: Gandhi’s funeral in India, the last days of the Kuomintang in China, first photographs of the USSR after the death of Stalin… At his passing in 2004, he endowed the history of photography with an inimitable legacy, which is still subject to new interpretations.

Helen Levitt
Born in 1913, in Brooklyn, Helen Levitt spent her whole life in New York, where she produced the majority of her work. At 18, she learned to use a camera and dark room while working for advertising photographer J. Florian Mitchell.

In 1935, after meeting Walker Evans and Henri Cartier-Bresson, she decided to become a photographer herself, purchasing her first Leica the following year. She taught fine arts at a school, and took interest in the chalk drawings children made on the streets of New York.

In 1938-1939, she became Walker Evans’ assistant and met James Agee. In 1941, Levitt traveled to Mexico and worked as video editor for Luis Buñuel. Edward Steichen organized her first solo exhibition at the Museum of Modern Art, New York (MoMA) in 1943. Up until the early 1950s, Levitt worked with James Agee on two documentaries, among which The Quiet One (1948), nominated for an Oscar.

Levitt then returned to street photography. In 1959, she received two successive grants from the Guggenheim Foundation to produce color photographs of New York. Many of the originals were stolen in 1970. She published her first book, A Way of Seeing, in 1965. In 1974, John Szarkowski presented her color photography at the MoMA via projection, in Slide Show.

In 1998, Levitt’s work made its first appearance in France at Galerie Anne de Villepoix in Paris. In 2007, Fondation Henri Cartier-Bresson held an exhibition of her work. Helen Levitt passed away in New York, in 2009.