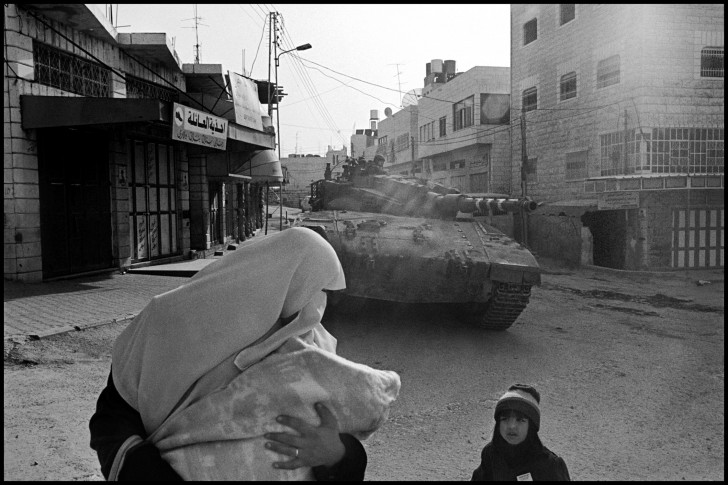 A religious Muslim woman and her children navigate their way around an Israeli tank during the Army's invasion of Hebron which helps to enforce a 24-hour curfew on the city center, Hebron, West Bank, 2003 © LarryTowell/Magnum Photos

On May 31st , after meetings at the Henri Cartier-Bresson Foundation in Paris, the jury of the HCB Award nominated Larry Towell as the 2003 winner for his project “The walls of no man’s land: Palestine”. This Award has been given by an International jury composed of 7 distinguished personalities in the world of photography:

-Peter Galassi : curator in chief of photography at the Museum of Modern Art, New York

“We were very pleased by the high level of portfolios that were often exceptional” declared the jury.“It was quite difficult to decide, and to eliminate proposals which also deserved recognition. We finally chose Larry Towell, above all for the quality of his work, his personal approach – never seeking the sensational nor exploiting despair. His sensitive eye, his powerful compositions, in the “grand tradition of reportage.” Paul Virilio remarks that “in this project the analogy with contemporary history is to be underlined; let us not forget that the historical dimension is very much part of the essence of photography”; and Robert Delpire adds “this dimension is also part of the Henri Cartier-Bresson Award”. Marta Gili concludes saying : “The question of territory is very much a leitmotiv in Larry Towell’s work.”

The exhibition, curated by Robert Delpire, is gathering photographs made between 2000 and 2004. BW prints, large panoramic: in over 10 years, Larry Towell seized Palestinian intimacy in West Bank, West-Jerusalem and Gaza strip. ” Intimacy, the antithesis of violence, is much harder to document than war, because it is invisible… I believe in a two-state solution for Palestine and Israel – two equal and uncompromised nations. I know that someday it will happen. If the light is in our deeds”.